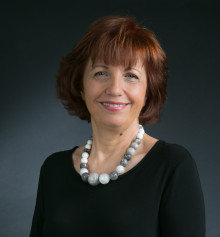 Leila De Floriani is a full professor at the University of Maryland with a joint appointment with the Department of Geographical Sciences and University of Maryland Institute for Advanced Computer Studies  (UMIACS).  She is also affiliated with the Department of Computer Science,  with the Center for Geospatial Information Science and with the Center for Automation Research. She has previously been a professor at the University of Genova (Italy), where she developed the first undergraduate and graduate curricula in computer graphics in Italy, and served as Director of the Ph.D. program in Computer  Science for eight years. During her career, she has also held positions at the University of Nebraska, at Rensselaer Polytechnic Institute, and at the Italian National Research Council.

She has been the editor-in-chief of the IEEE Transactions on Visualization and Computer Graphics (TVCG) for two terms from 2015 to 2018,  and served as an associate editor for IEEE TVCG from 2004 to 2008. De Floriani is currently an  editor of ACM Transactions on Spatial Algorithms and Systems, Computers & Graphics,   Computer Science Review, GeoInformatica, Graphical Models, ISPRS International Journal of Geo-Information and International Journal of Spatial Information Science. She has served on the program committees of over 150 leading international conferences, contributing in several conferences in a leadership capacity.

De Floriani has authored over 300 peer-reviewed scientific publications in data visualization, spatial data representation and processing, computer graphics, geometric modeling, shape analysis and understanding, garnering several best paper awards and invitations as a keynote speaker. Her research has been funded by numerous national and international agencies, including the European Commission and the National Science Foundation.