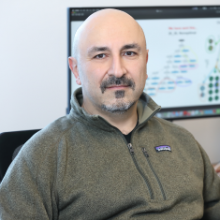 S. Cenk Sahinalp received his B.Sc. in Electrical Engineering at Bilkent University, Ankara, Turkey and his Ph.D. in Computer Science from the University of Maryland, College Park. His Ph.D. research was on parallel and serial algorithms for string/sequence processing. After a brief postdoctoral fellowship at Bell Labs, Murray Hill, he has worked as a Computer Science professor, most recently at Indiana University, Bloomington.

Sahinalp’s research has focused on combinatorial algorithms and data structures (especially for strings/sequences) and their applications to biomolecular sequence analysis, especially in the context of cancer. In the past decade, his lab has developed several algorithmic methods for efficient and effective use of high-throughput sequencing data for better characterization of the structure, evolution and heterogeneity of cancer genomes. He has (co)trained more than two dozen Ph.D. students and postdocs, many of whom now hold independent academic and research positions in the U.S., Canada and elsewhere.