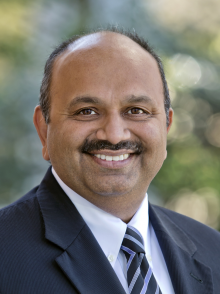 Amitabh Varshney is the Dean of the College of Computer, Mathematical and Natural Sciences and Professor of Computer Science. He served as director of the UMD Institute for Advanced Computer Studies (UMIACS) from 2010 to 2018 and as the interim Vice President for Research during 2016 - 2017. A leader in interactive visual computing research, Varshney’s work has focused on exploring the applications of high-performance computer graphics and visualization in science, engineering, and medicine. His research results are being used in climate modeling, plasma physics, nanomanufacturing, the design of buildings, cars, and submarines, medical imaging, gene sequencing, and the creative arts. He has engaged in research collaborations with a variety of partners in industry and government agencies.

Varshney has worked on the design and implementation of virtual walkthroughs of proposed structures, such as buildings, automobiles and submarines. His research in molecular graphics has involved devising new algorithms for parallel and analytical computation and visualization of molecular surfaces, their interfaces, and electrostatics.

Varshney has also contributed toward the development of new algorithms for a number of research areas in graphics and visualization including visual saliency, summarization of large visual datasets, automatically generating multiresolution hierarchies, procedural textures, and rendering with points, images, meshes, and volumes. He is currently exploring several applications in general-purpose high performance parallel computing using clusters of CPUs and Graphics Processing Units (GPUs). He has consulted and collaborated with NVIDIA, Honda, IBM, Daimler Chrysler, General Dynamics, and Reuters.

As part of the UMD-University of Maryland, Baltimore (UMB) strategic partnership, Varshney helped bring together scientists and clinicians from both institutions to establish a multi-disciplinary Center for Health-related Bioinformatics and Bio-Imaging (CHIB), tasked with solving grand challenges in personalized medicine and health care.

Varshney received a National Science Foundation (NSF) CAREER Award, given to outstanding junior faculty who exemplify the role of teacher-scholars so they can further their research in their areas of expertise, in 1995 and the IEEE Visualization Technical Achievement Award in 2004.

NVIDIA Names University of Maryland a CUDA Center of Excellence